Customer support has always been a bit of a necessary evil for companies. Nobody wants to spend money on support, but without support would you have any customers? I doubt it.

With the rise of live chat, it's even harder for support reps to deliver good responses, in good time. With email it's acceptable to reply within a day or so. With live chat, that's not ok. You'll need to reply within the hour to impress.

With the rising interest in machine learning and artificial intelligence, live chat software companies are asking—how can we use this tech to drop the cost for our customers?

It's an exciting time of experimentation, trial & error, and data crunching. Will the bot stay in the background or will it replace support reps?

The first time I'd ever interacted with a chatbot was when I was around 13 years old. Back then, MSN messenger was all the range and it's how I chatted with my friends after school.

The bot was named Smarterchild, a poor chatbot basically there for you to insult and mess around with. You just befriended it inside messenger and you could interact with it, with it coming back with some pretty witty replies.

I never thought 11 years later chatbots would still be relevant, if not more so. But whereas the bots back then were simple responders designed to take insults and abuse from teenagers, bots these days are designed to be actually helpful.

They exist to take away some of the burden and drive down ticket volume.

But there's a few different approaches to the whole bot and customer support situation. Some are in the background, ready to pounce when the times right. Others are in your face and it's difficult to get to an actual human.

Bots should be used to improve the end user experience, not just to make life easier for customer support teams.

Which ones better? Since these customer support bots are so new, I don't think there's enough data to know yet. But let's look at a few different approaches.

A popular approach to customer support bots and integrating them into live chat is to keep them hidden until they'd be useful. This means they:

While they probably don't deflect as many tickets as a blocking bot, they do encourage customers to help themselves, or at the very least give them the heads up there's a help center where they can try and find the information themselves.

By plugging up our knowledge base and live chat we've had cases where the ticket has been deflected without us needing to be involved at all. It's pretty strange the first time this happens, but spending less time answering the same questions can save you a ton of money.

The biggest benefit of getting a bot involved with background tasks is that they're so darn quick.

A bot is going to be able to surface a useful help article in milliseconds, whereas a support rep will take minutes. When you're talking about support at scale, that's thousands of dollars wasted.

But what do customers think about this? In a survey, LivePerson found that consumers are quite happy to bots to take on simple tasks, but they'd rather wait for human help for the complex ones.

The real challenge will be training bots to understand the difference between a simple and complex task. With machine learning this is easier, but you'd need to crunch a lot of data to get it right. People have a plethora of ways to say the same thing, and there are so many languages to support.

Blocking bots are polar opposite to background bots. Whereas a background bot will stay quiet until needed, a blocking bot is right there, waiting to answer your questions. You won't get to a human until you explicitly say you need one.

While this will likely drive down support costs, is it too annoying for customers? According to a report by LivePerson, the biggest concern for consumers is that a bot simply won't understand what they're trying to say. 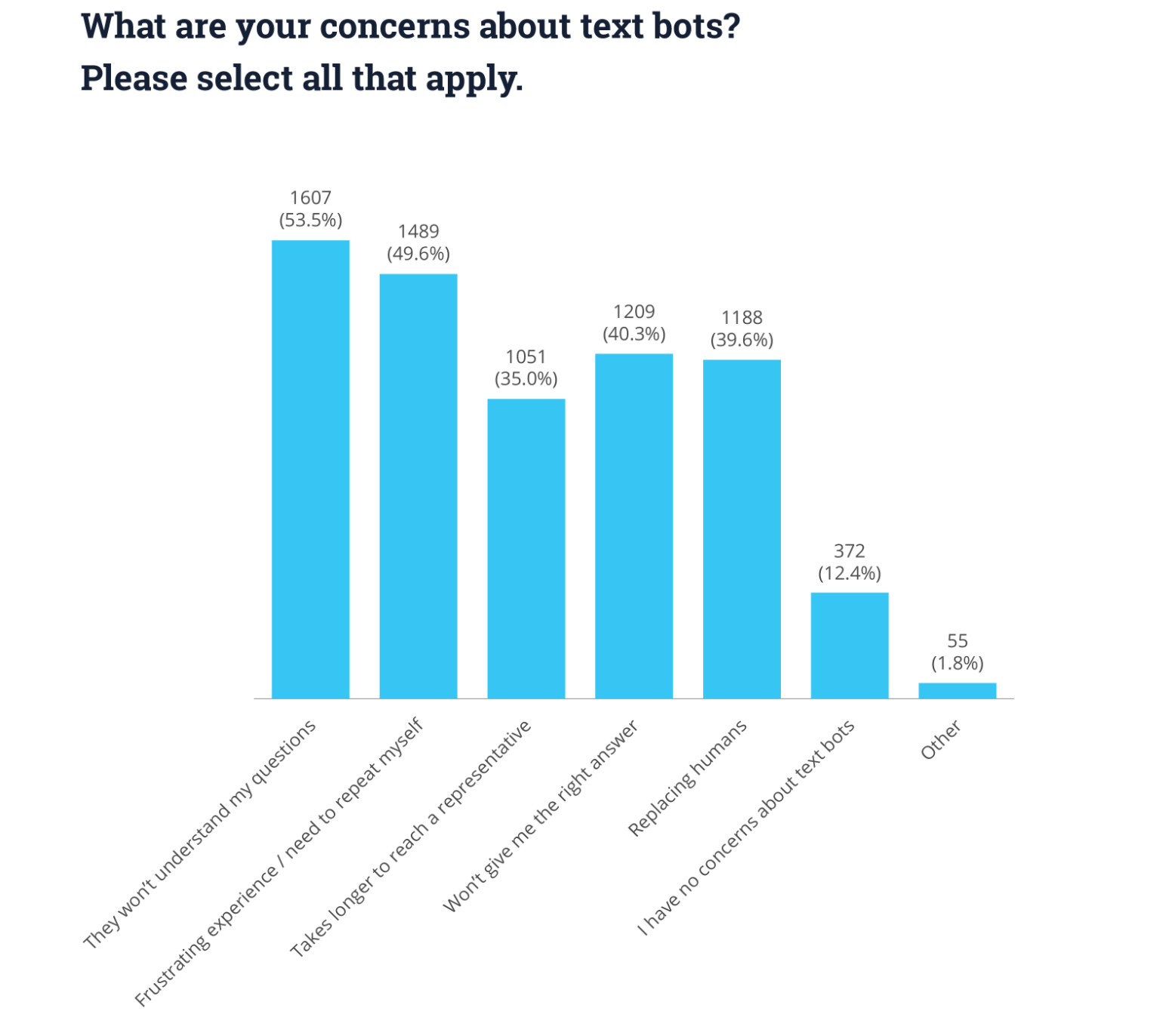 Blocking bots certainly make this more likely, but perhaps the cost save in support is worth it?

Revolut, a startup based in London, are building a 21st century banking alternative. They recently rolled out their own take on live chat bots called Rita (which stands for Revolut’s Intelligent Troubleshooting Assistant).

To reach a human, you'll need to pass the bot, and it'll only suggest passing you on if Rita's having trouble answering your question.

The consistent factor between the two approaches is that customers know they're talking to a bot, not a human. This seems like the sensible thing to do. Who knows if that'll change if bots get good enough to pass off a humans. It might already be happening without us knowing.

"Don’t try to convince customers that they are talking to a human, and don’t advertise that your bot can handle something when it can’t. As always, the key is to under promise and over deliver."

Proactive bots are a sort of middle ground between background and blocking bots. They prompt customers to talk to them and they'll answer some of their questions but an agent is there waiting in the wings to help with any questions it can't answer.

Drift's sales bot is a good example of this. It'll pop up and prompt customers to ask some questions to try and get some interaction going so an agent can jump in and assist them. If the right answers and chosen, it's be able to book a demo without any human interaction.

Getting visitors to participate and talk to the team is an interesting approach to customer support bots.

While most support bots tend to try to reduce support load, maybe increasing support load by interacting with potential prospects and generating more sales is a better approach?

I think it'll be a good few years before we know which bot approach is best. Customers are only just getting used to interacting with bots, and there's just not enough research out there to know.

With the introduction of bot assistants like Siri and Cortana making their way into our phones and laptops, it makes sense for bots to make their way into customer support, especially for repetitive tasks. Time will tell if they're a good fit or just an annoyance.

Got your own opinion on customer support bots? Found another type of bot you'd love to share? Let me know below! 👍

If you're anything like we are as startup founders, you'll have considered joining an accelerator program. At least once. I mean, it seems like a great deal, right? You get

Startup pricing’s a touchy subject. Nobody’s quite sure how to do it best. And at the end of the day it’s very dependent on your exact situation.