What a wonderful time of the year. The month that brings the transition from Summer to Autumn. Trees awash with glorious displays of reds and orange. Nights get longer. Days become cooler. All holidays come to an end and all the work starts again.

In fact, come to think of it September was a lot like August for us 🤷‍♂️ Not only because I had to deal with yet more heatwaves. But also because we shipped boat loads of stuff, including some huge changes to the Dashboard.

In a similar vein to August, one of the biggest change this month was pretty darn big. We shipped a complete reworking of the entire settings dashboard. 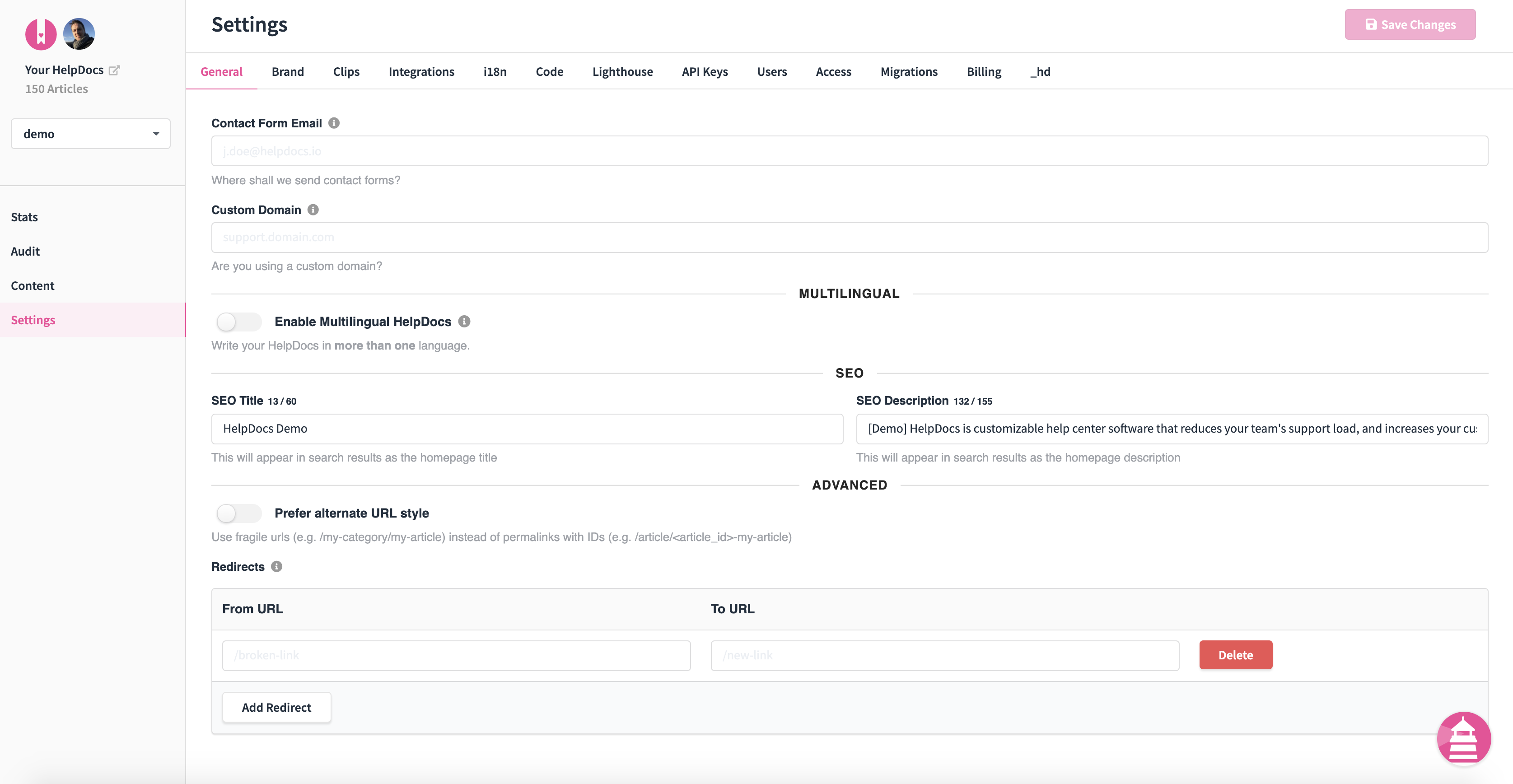 Ok a little bit of a biggie!

As with everything we do, the point of the settings dashboard overhaul was to offer a much better user experience. And we haven’t had any complaints, so it’s got to be a winner 💪

The workflow is pretty much the same as it was before. What’s changed is the layout. Now, from larger browsers everything is tabbed across the top of the page. Which means there’s a bunch more horizontal screen real estate to devote to the important parts 🙃

And for a bit of a cheeky bonus, it’s made things a lot quicker too. 🎉

Over the past few months you might’ve noticed our eye-popping V4 Bars template. 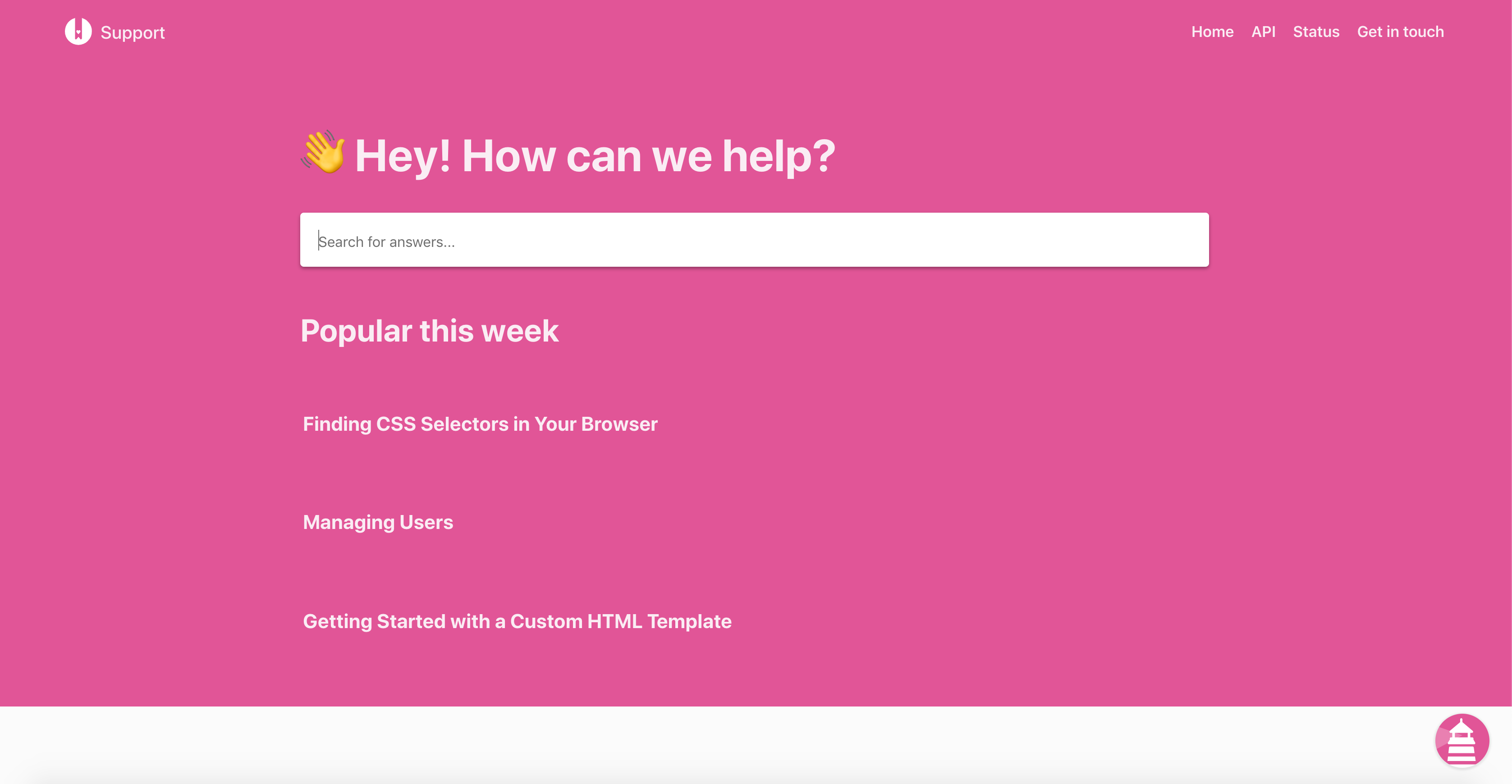 It’s been turning quite a few heads. I heard it was even listed as GQs sexiest knowledge base template of 2019 or something. True story! 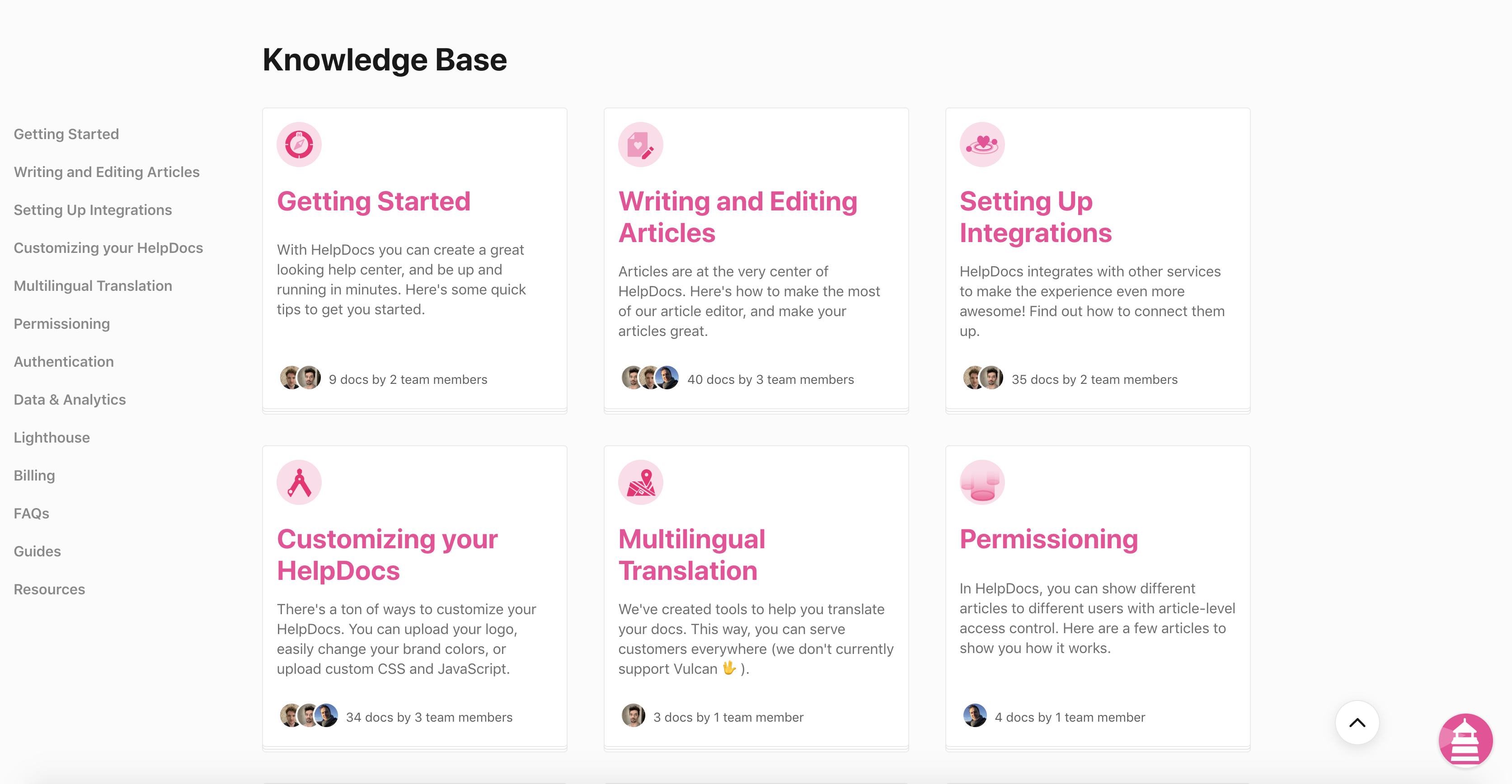 It’s definitely the most asked about template we’ve released. That’s for sure!

Anyway, point is in August we released it as a useable template for everyone. But we figured we couldn’t stop there. So in September we took it a step further and decided to release a customizable starter version of the V4 Bars template.

You can get it here.

Since it’s built on CSS Grid, it means what you can actually customise with just some basic CSS is phenomenal.

Smaller but no less important

Refined Filtration. Back in August we added an awesome new content filter feature in the dashboard.

Everyone agrees it’s a super awesome tool. So in September we doubled down on it. And by doubled down I mean we added the ability to filter by subcategory.

We took awesome and made it slightly more awesome 🙃

Different Stats for Different Sets. For multilingual accounts, we’ve gone ahead and made stats a whole lot easier to work with too. Now, you can filter your stats by the specific language that you’re working in.

That also means you can export stats for a specific language too.

It’s all English to me. On multilingual accounts, one of the biggest benefits for end-users is our language detection. Perhaps surprisingly, this is where we detect the language the visitor to the knowledge base is using. I know, it’s a surprising name but we thought we’d go with it.

In September, we made some changes to improve the experience. This includes updates to search, and converting language codes to match ISO standards before trying to match.

You probably won’t notice any of this. But it’s a great feature that’ll improve usability. Trust me! 😁

Beautiful Lines. Some users pointed out a few inconsistencies with line breaks in the text editor. Things like line breaks in list items and that kinda thing weren’t working in the most optimal way. So we polished that up a little. ✨

Permissioned Article…Who Dis?. When users reach a 404 page they have the option of contacting or returning to the home page.

On permissioned articles, neither of those options are ideal, particularly when all the user needs to do it login! 😬

Drop it Like it’s Empty. We pride ourselves on providing some basic but useful data. Trouble is, our database was recording empty search results. They’re not useful. So we filter them out!

Order Right The In Things Putting 🤔. It turns out software can be too fast! This happened with our Slack integration, where our integration was finding and returning results faster than Slack could post the initial “search started” message. It was back to front. So we gave ourselves a handicap to let Slack catch up.⚡️

Tagged That. For a while tags have been siloed to their respective articles. While they would likely resolve to each other (probably, maybe, possibly 🤷‍♂️) there was no way to reuse tags you’ve used before throughout your knowledge base.

We’ve made it so the tag dropdown lists the tags used throughout your knowledge base. 💪

But not just that.

We also included a teensy slice of meta data that indicates how many articles use the tags. ✨

This is gonna a super useful bit of information since you’ll be able to see where conflicts arise, and if you’re overusing tags.

Basically it’s a new compliance thing. It’ll impact some users…maybe. It’s to do with recurring billing authorization and all that stuff.

The truth is, you probably don’t care about this. I know I don’t really—don’t tell the engineers 🙈 But if you get any kinda requests regarding reauthorization of your recurring billing or anything like that…this is why!

What’s more, I feel like we need to keep it here because the engineers did a ton of work and deserve a massive pat on the back for not screwing it up 👏

Updating Searches with Suffixes. This is a neat little addition. Basically now when a user suffixes their search in the same session, we update the results and data rather than than duplicating. 🔍 🔎

Persistent Users. There was an issue when removing users from the Group modal. Basically clicking the x closed the modal but didn’t remove the user. It was frustrating as heck! So we made it work like it should. ❌

Multilingual Searches for Nothing. Some users reported that search wasn’t returning any results when multilingual was enabled but there was no additional language content. It was peculiar to say the least. Now search just works regardless 🔍

I want that one. There was a weird little bug in search where some results were unclickable. It was something to do with search analytics failing to record the route. Or something. It doesn’t matter really ‘cause it works now! 🙃

Pretty Links Working It. A bug that was a bug that wasn’t a bug next. Pretty links were functioning on accounts with them disabled. We figured people had them disabled for a reason so we stopped that craziness 🐛

To Delete or Not to Delete…That’s the Meta. When users tried to completely delete the title and slug fields in the Category meta editor, it bugged out and added the text back in. Now we’ve fixed it so you can delete it all. DELETE EVERYTHING! 🔙

This Isn’t the Clip You’re Looking For. Clips were taking on a mind of their own if users clicked outside the Clips modal in the text editor. The first clip decided it wanted to be part of your article. We weren’t having it, so we caged the Clips back up. If you wanna free them, you know where they are 👮‍♂️

We added extra indentation for each category in content tab…this one’s pretty self-explanatory. Space…we added it! 👾

There Can Be Only One. Some code blocks were displaying with double languages. That made very little sense. Unless code blocks learned how to communicate in multiple ways simultaneously. We figured they were lying! 🙊

Add the Languages. There was an issue where the dashboard crashed when users deleted the primary language and added a secondary. It was a pretty fringe case. But it happened. Now it doesn’t.

Exclude Right. Some users reported an issue where excluding the IP wasn’t making any kind of difference to their stats. We figured either they weren’t looking at their docs when they wrote them, or something was up. Turns out we were right ✅