A few days ago, the creative geniuses at Geckoboard shared a glorious poster with a bunch of comical characters, affectionately referred to as "The Tickets".

There are nine tickets in total, each representing a type of support request that many working in customer support can relate to. 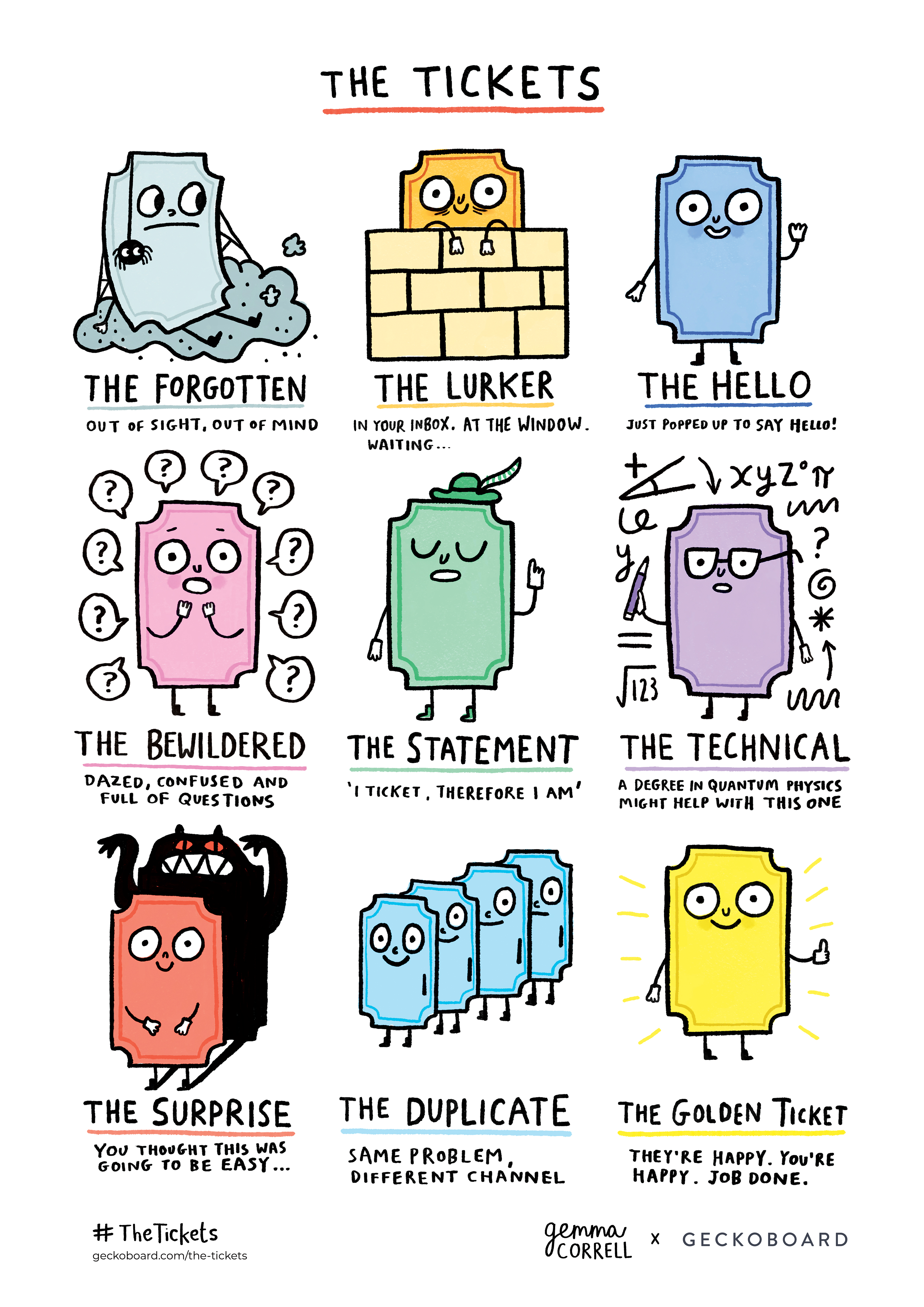 The Forgotten, The Lurker, The Hello, The Bewildered, The Statement, The Technical, The Surprise, The Duplicate and in a quiet space at the end of the list was one that we all long for, "The Golden Ticket".

The Golden Ticket represents the memorable tickets. The once in a while extraordinary positive interactions. The troublesome request that instead of causing extreme levels of mental or emotional anguish, led to a resolution filled with accomplishment.

The life affirming tickets that give you the warm and fuzzies, and make the whole job worthwhile.

As the team at Geckoboard put it, a "ticket to keep".

This wonderful piece of artful analogy got me thinking back to my first proper customer service role—by which I mean the first role where support wasn't just part of the job, but the job itself.

As with everyone, there is one ticket in particular that stands head and shoulders above the rest. Not because it was an easy resolution, where everything went perfectly. In fact, if I'm honest, it was probably the ticket that cost me my job.

To give a little context, attitudes toward service were much different then. It was over a decade ago—which ages me terribly—and I was working as a billing support agent for a telecommunications company.

My day-to-day consisted of 12-hours back-to-back calls. On the billing queue, you were usually dealing with angry "Bewildereds", complaining about the cryptograph that passed for a bill. They were often dumbfounded by tariffs and pro-rata charges, and almost always convinced we were trying to rob them blind.

On the odd occasion, you'd get one who thought they were a "Technical", until it turned out they were closer to "Statement" tickets, at best—more often than not, they'd reveal themselves as yet another angry "Bewildered".

It was a typical day. I'd most likely come back from one of my two 15-minute mandated breaks that were just about enough time to sneak in a cheeky smoke and grab a plastic beige cup of warm, brownish water that passed for coffee.

I sat down at my desk, and prepared for battle with the army of bewildered tickets that would befall me.

No sooner had I set myself "available" when my first call came through. It was a bewildered, as I anticipated.

The voice on the other end was quiet. Fragile. Almost breakable. As if the slightest raise in my voice would cause it to break into a thousand tiny fragments.

I listened as they recounted their issue. An overspend on something they'd never heard of.

I guessed the issue was probably data related. The iPhone had just been released on a rival network maybe a year before, and the retention team were doing all they could to keep us afloat.

As a result, we'd had many callers who had been put on new tariffs, encouraged to upgrade to new handsets that used mobile data. There were many occasions where people had been hurt by extraordinary data bills. Usually because they had no data allowance—It was early days, and nobody was really sure of what the data tariffs covered.

As I mentioned before, I've seen a huge shift in attitudes when it comes to support. A decade ago—at least for the company I was working for—the unspoken policy was along the lines of "the customer is right until we've proven they're wrong". Our goal within the billing support team was to convince the caller they were at fault, get them to accept the liability, and drop the call as fast as possible.

Our KPIs focused on a combination of average call times, hold times, calling hours per day, and CSATs—of course.

Until that point, I was pretty darn good at the job. I could have a quick chat and turn around a call well within the 1-3 minute call time. I had a running CSAT of around 80%-85%, and worked as hard as every other smoker everyone else in the office

This call would change everything, though.

I took the caller's mobile number and double checked the name. We'll call her Gladys—because I don't recall her real name, and in hindsight she feels like a Gladys. A few security details later, though, and she'd already given me much of her life story.

I remember she was a "Yorkshire lass". She'd said it with pride. Born in and raised in Sheffield, not far from where my own Grandparents lived for many years. A fact I was happy to share. As I did so, her voice lit up and I could tell she needed someone to talk to.

As a phone CSR, I'd learned to embrace those types of call. They made the day a little more interesting, and gave me something to talk about. So I was happy to be an ear for a few minutes.

I learned how she met her husband when they were both teens. How he'd gone off to war and she'd lived a full life while waiting for him to come back from fighting those "no good fascists".

They married not six weeks after his return, and spent their life travelling to various places and experiencing everything life had to offer. They hadn't had children, but had been married for over 60 years, and she'd loved every moment.

I recall thinking that hearing her recount her adventures was like something from a Ron Howard film.

As she continued, though, she fell soft and distant. Her voice cracked.

Her husband passed away a few months previously from bowel cancer. She told me how he used to deal with all the bills—something I heard a lot from people in that age bracket.

Hearing her choke up hit me hard, not least because I'd lost my father to cancer a few weeks before. I was still quite raw and I could tell Gladys was too. I apologised for her loss, my own voice cracking as I did, and was quick to move back to the subject at hand.

Gladys' tale was enthralling. So much so I'd forgotten what I was doing.

At that point, my talk time would have been around a staggering 5 minutes. Though it was relatively late in the day, and I knew I'd been pretty fast so I wasn't too concerned.

I opened up her itemised bill to give her the run down, and tell her what she'd done wrong.

I remember her additional charges amounted to something like £150—It was 10 years ago, I don't recall exactly! I only remember it was big enough for me to feel bad.

What I do remember is that it was a subscription, or recurring charge, that someone in the company had added to the account. And it was charging something remedial—like £4— every single day.

I explained the charge to Gladys, and was taken aback by her unwavering willingness to accept it. It had become an easy ticket and that could've been the end of it. If I'd followed policy, it should have resulted in a justified call resolution.

But after ascertaining that Gladys had no idea what the charge was, something niggled at me.

My internal monologue battled away for a moment. If I ended the call there, chances are she would be back next month. Next time likely a little more distraught, with another £150 being tacked on to her account.

That said, she'd be someone else's problem and it wouldn't be up to me. So why should I care.

The truth is, I'd let my guard down. By that point, my call time had been well and truly blown out of the water. And perhaps for the first time as a support agent, I cared. I wanted to do the right thing by Gladys.

I suggested removing the subscription along with 3G data from her phone's capability, so she wouldn't be hit by a crazy charge in the future.

But it still didn't feel enough.

In hindsight, maybe I was being too emotional. Maybe I'd become too invested in getting a more positive resolution for Gladys. Who knows! Frankly, who cares. Whatever the reason, I wanted to find a way to consolidate the charge, and at least try to take away another burden. But as an entry-level CSR, I had no power to refund that kind of money. My limit was £30 per customer.

In any case, the policy was to apportion blame, educate and move on. So I knew if I escalated the call, it wouldn't be resolved to my satisfaction.

So I cheated. I went into the tariff settings and added a few discounts. It wouldn't be a lump sum that would cancel out the charge in one hit, but over time, it would. What's more, there was no expiry on the discounts—so in theory she could still be getting 50% off her bill a decade later. #SorryNotSorry

Gladys was happy with the resolution, expressed her thanks and ended the call.

And that was it. Resolved.

I sat for a moment and glanced at the 30-minute call counter. I might have screwed up my running average, but I felt strangely at peace. I knew I would probably get in trouble. Heck, if my supervisor found out, they would probably have removed the discounts anyway.

I applied the £30 credit, closed the ticket and set myself available for the next call.

An angry, shouty bewildered jumped on the line and opened the with an extreme barrage of profanity.

Is immediate support a little over the top? I think so. In this post, I dive into how shops and SaaS companies might wanna tone down their proactive support and keep things a little more chill.

We take a look at how you can turn a list of Knowledge Base search keywords into actionable insights to help improve your self serve help.

What happens when you leave your apartment and a COVID spike happens whilst you're staying in hotels? Find out in the next part of the series.