A couple of years ago, I first wrote about venturing into the splintery world of woodcraft.

I had no idea it would turn into an ongoing obsession. I had even less of an idea that some two years later my now fiancée, Cat, would be demanding my services as a not-so masterful whittler for our wedding.

Yet, here we are.

My thumbs numb from hours of constant swiping at branches of sweet chestnut. My hands adorned with blisters and scars. Reminders of mistakes made while churning out mushroom shaped wedding favours. All in the name of our upcoming nuptials.

Hand carved wooden mushrooms intended as the name setting and favour for each wedding guest. It's not your typical wedding. While that might sound odd, I've found it's best to go with it 😄

The importance of managing expectations

The actual number of mushrooms I make will, at final count, be somewhere in the region of 160. Around twice what we would need to give everyone their taste of my master craftsmanship.

I'd be lying if I said this was down to my badass ability to pump out mushrooms like there's no tomorrow. The reality is it's because of a straightforward oversight: We didn't set expectations.

With well over a year to the date and eagerness in abundance, I just started cutting. I took my Ben Orford 3-inch precision sloyd knife and my Robin Wood carving axe and attacked whatever green wood I could get my hands on.

Chopping and chipping lumps of apple and sycamore into cute little mushrooms of various shapes and sizes. Some ended up the size of a standard shot glass. Others were no bigger than 50-pence piece. Some flat, others tall and thin and a few quite bulbous—reminiscent of Toad from Super Mario.

After a few months of chipping away at a steady pace, I was pretty happy with my work. With around 60 carved, I was almost finished.

Sure, they needed some refining. Sanding and oiling, to give it a professional look.

Some were, I must admit, a little too phallic to be suitable for a PG wedding—I don't think Cat's Nan could have coped with a tiny penis-shaped object standing, rigid, in the middle of the table.

But on the whole, I was happy with what I'd made. Cat, on the other hand, was a little less impressed than I'd hoped.

When you've been with someone for the best part of a decade, you start to pick up on subtle mannerisms when they talk. They are like tells in poker. A slight hesitation before responding. A raised inflexion and the elongation of words when they say "yeah, they're oh kaaaay", indicating they are 100% not ok.

This was not a time of subtle mannerisms.

"I thought they'd all be a bit bigger" Cat explained, in a somewhat emasculating manner.

I should have expected it, though. After all, she didn't know what to expect.

As a result of being too hasty to crack on with the job at hand, I had overlooked the most fundamental principle of any work. Agree on the deliverables.

As a result, I faced the daunting task of carving the whole lot all over again, in the space of just four months. And to do so, I'd need a serious boost to my productivity.

As I mentioned, each mushroom was a unique shape. They were all made with the intention of being unique, as I'd thought it would add a more personal touch.

It's fair to say it wasn't a productive way to work.

Whittling various shapes and sizes take up a lot of time. Bigger mushrooms took around 2 and a half hours. Smaller ones could take anywhere from 30 minutes, to an hour and a half.

Alongside actually carving, I also had to think about the shape and adopted different techniques to achieve the desired shape. This added on a bunch of unnecessary time.

In hindsight, I've realised whittling unique shapes in the belief that it would be "personal" was dumb. I'm already hand-carving wooden mushrooms. It's already personal 🤦‍♂️

I also realised standardisation doesn't always result in a lack of character. So long as you standardise the right part. Faced with the prospect of whittling another 86 mushrooms, regulating the process and initial shape was vital. So, I decided to create mushroom 'blanks'.

With Cat now vocal about what she expected, we agreed the initial shape would be around the size of a large shot glass, with a bell-shaped cap. Something reminiscent of a shaggy ink cap.

Making blanks meant I could streamline the process. I'd use four initial axe cuts to angle the edges of the cap. Then I'd use a pruning saw to create stop cuts between the stem and base. And finally, I'd take my sloyd knife and shape everything into a majestic mushroom—majesty optional. 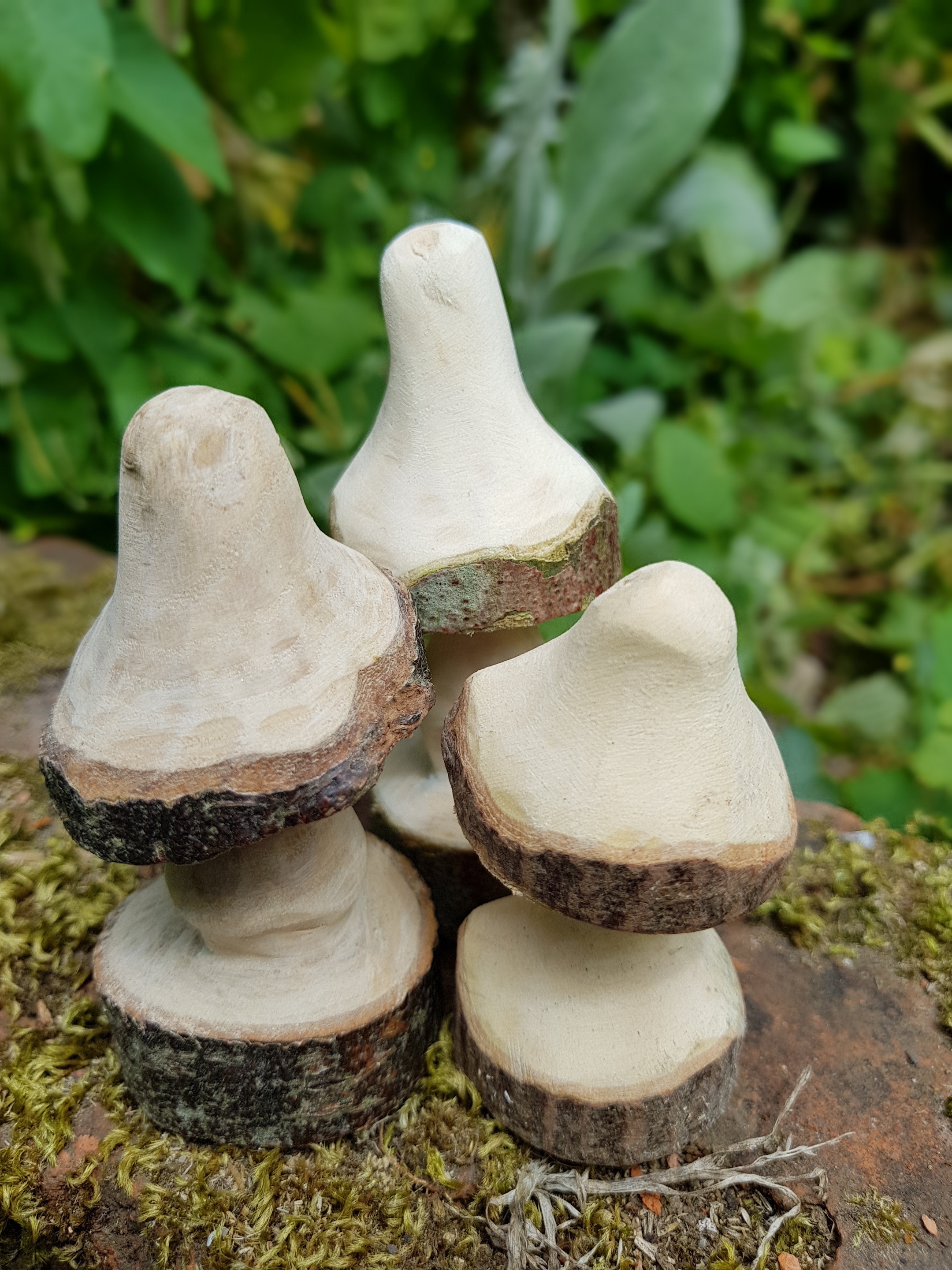 My carved mushrooms, ready for the big day

Setting out my process crushed my average production time from an hour to 10 minutes per mushroom. What's more, because green wood is not 100% predictable, the mushrooms are still unique. Despite the process being the same.

If you set yourself 4 hours, you'll take 4 hours.

They call it Parkinson's law. The idea that "work expands so as to fill the time available for its completion". It's a truth I've come to realise many times over the past few years.

In my work, writing, and even my whittling I tend to use all the time I allocate to it. To my detriment, because I tend to assign too much time.

When I had the luxury of time, I'd taken a laid-back approach. Even if I only made a couple of mushrooms a week, I would have made enough. So I worked at my leisure.

With only four months to go, I had to draw a line under my experimenting. It was, as you can guess, not productive.

Instead, I decided to try out sprinting, blocking out a couple of hours of carving at a time. At the end of a suitable day, or in an hour lunch-break—one of the perks of working from home, for sure—I'd set out to carve as many mushrooms as I could. And to keep myself accountable, I kept track of my "personal best".

The goal of each sprint was to either reach or beat my PB.

This meant thinking hard about what was necessary. Instead of fixing mistakes I had to be ruthless. If the wood split or cracked by mistake, I binned it. If I made a mistake, I started again. No waiting around to see if it panned out with a little perseverance.

Perhaps it's not a surprise that doing away with unnecessary activities would lead to yet another productivity boost. Who knew!

Whittling mushrooms has highlighted that a lot of productivity hacks are straight up common sense. But they are also easy to overlook. Making sure you know what's expected of you before you start work is a no-brainer.

But sometimes, when you're particularly keen, it's easy to get caught up in the moment. Take a minute and manage expectations to save time in the long run. What's more, streamlining the way you work doesn't have to hinder your creativity. Find the balance between the two and push for constant improvement.

Oh! And in case you're wondering, my personal best is 20 mushrooms in 2 hours 💪

We delve behind the scenes and in our brains to see how we interpret words and turn them into something we read. We then take a look to see how we can create more readable Knowledge Base articles using this information.

eCommerce is tough and the support can be overwhelming. Carry on being consumer-centric without having to sacrifice your support team by better integrating your Knowledge Base.