Since we launched HelpDocs 5 months ago I can safely say I’ve learned more than ever before.

We’ve taken our fledgling idea from nothing to profitable with over 100 users on paying teams. Getting to this stage, though, has been one of the hardest things I’ve ever done.

It’s not my first rodeo. I’ve built startups from nothing before.

In fact, my cofounder and I were working on another startup when we first thought of HelpDocs. That startup was profitable and growing. From the outside, everything looked great.

But inside we were struggling. With product, with growth, and especially with support.

We tried just about every knowledge base there is out there to reduce the number of tickets we were getting. We found some good platforms, but nothing great enough to really make a dent.

Knowledge bases are usually relegated to features in big applications. They’re not allowed to thrive and stand on their own. They feel pretty unloved.

It was a simple enough idea. A standalone knowledge base that looked great, was easy to customize, and a breeze to maintain.

While the idea was sound, it seemed too small. Could a knowledge base really be a whole product?

I didn’t think so. For over a year I held off. I kept trying new software hoping it’d make the difference.

But I still couldn’t shake it. It was something I couldn’t not build. It kept me up at night. Yeah, I know how sad that sounds.

v1: A Terrible Product Made Quickly

Startups almost always make the mistake of launching too late.

They keep their products secret, working in dark rooms, not getting people on board until everything’s just perfect.

Except it never is.

Products built in silos never work out. You need to promote yourself tirelessly to get anywhere, and that starts by getting people involved on day 1.

Products built in silos never work out. You have to promote from day 1.

Your product will probably suck. Ours did. But if you don’t validate it quickly, you can’t even know the market exists.

So how minimal should your product be?

Turns out very. You can get away with a lot less than you think.

I hacked together the first version of HelpDocs in about a fortnight.

Looking back on it, it was awful. I mean, take a look for yourself. But it was good enough to get us to revenue. 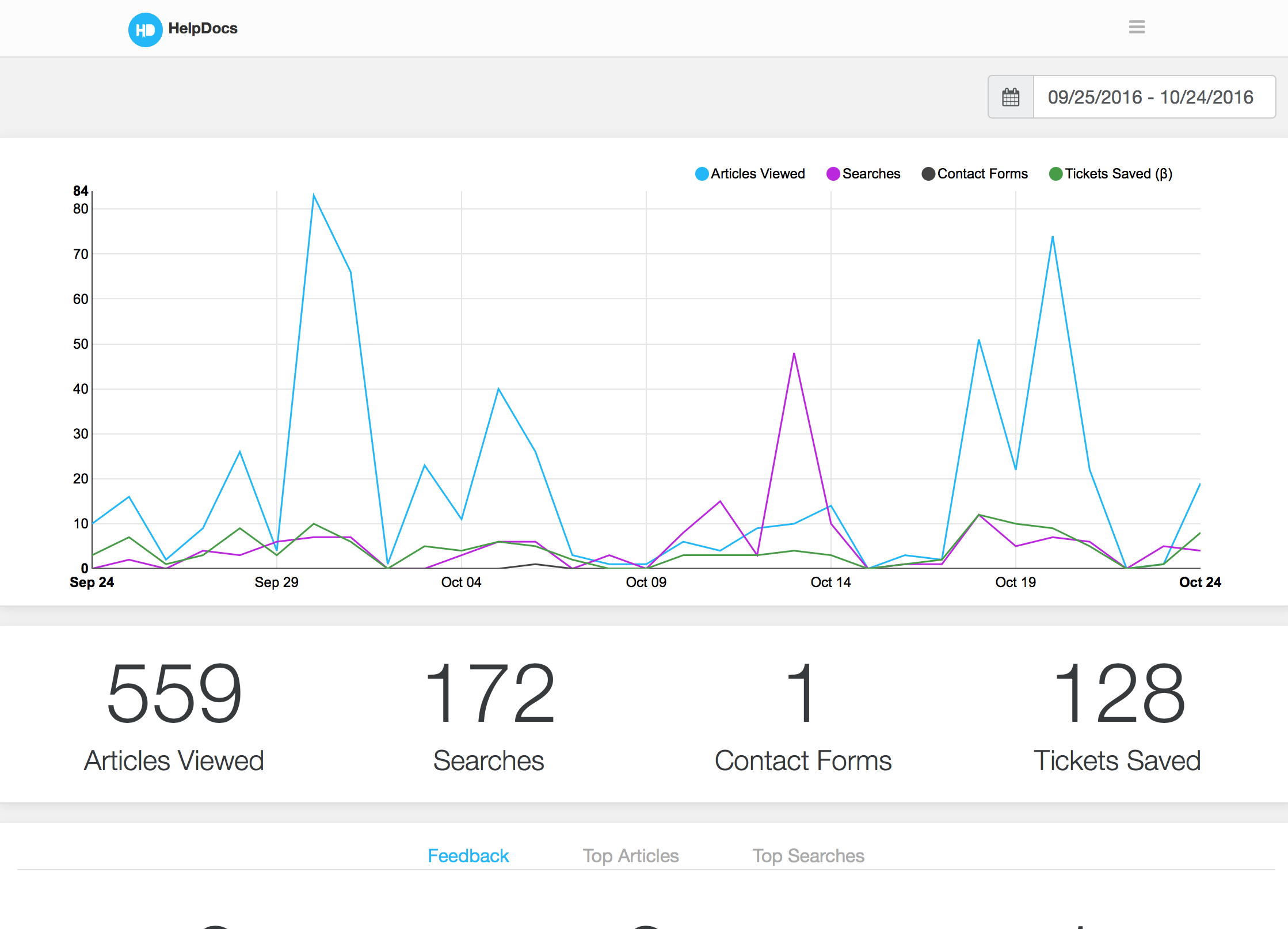 Launching a Knowledge Base SaaS

We shut down our previous startup to start building our Minimum Viable Product (MVP) in June 2016, and launched it to the public less than 3 weeks later.

We promoted on Twitter, Facebook, and Medium. We told everyone we knew. We sent out a hundred requests for feedback.

We have some great friends, and they helped us squish some bugs. They gave us some crucial early feedback.
But nobody wanted to pay for it.

We spent the week frantically fixing things and adding new features. It was pretty scary. We’d just shut down another startup to work on this, and I was worried we’d made a mistake.

It took a few days, but I got over myself. We had no audience, no real network, so it’s not a huge surprise we weren’t an immediate success.

I thought about how to validate the demand a little quicker, and decided to start running some (very small) paid marketing experiments.

AdWords was my platform of choice.

I was a bit of an advertising newbie. I’d experimented with paid acquisition before, but it’d never worked out. Either we had the wrong product or the wrong marketing message, but something was wrong for sure.

So I set aside a few hundred dollars from our bootstrappers budget and got to work.

One campaign was all it took. Less than $100 in ad spend acquired us 2 customers.

Sure, $50 in MRR’s hardly enough to pay for my coffee habit. Or our servers. Or the software we buy.

But the ROI from our marketing was enough to prove that people actually needed better knowledge bases. And that was good enough for me.

What We Should Have Done Better

In the end, moving on to HelpDocs was a great decision. We’re making more money from happier customers, and we’ve finally found a knowledge base product that works for us.

But we still made a ton of mistakes along the way. Not least of which was not validating the market sooner.

I’d asked around some friends to see if it’s something they’d use. They almost all said yes, and yet none of them gave us money.

That’s not because they were lying. Or because they're cheap. It’s because they’re our friends. They wanted to encourage us, so they said what we wanted to hear. And that’s OK!

Next time I’d start out with paid acquisition, funneling traffic to a landing page where I’d presell subscriptions. I’d get money up front to validate the thing I was trying to sell. We’re still finding our way. HelpDocs is a great knowledge base product already (and 1000 times better than that first version), but it’s not perfect.

Today I finished a huge development sprint. I’ve been adding features and refining the platform for a while now, and it’s finally at a stage where I’m happy with it.

Marketing’s something we’ve previously been terrible at, something that I particularly hate. So that’s the next frontier. And more sales, which is luckily something we’re better at.

In that vain, I’ll be writing some more about our journey, and what’s working for us.

If you’re interested you should sign up to our Bookmarked monthly—we send out interesting startup reads from around the web (and some of our own) about once a month.

Dirty glasses, missed housekeeping, and hospitality sentences are too common in hotels. Here's what you can avoid in your own customer support to keep customers happy.

Baggage drop-off. Patting down. Running to the train. Travel is so stressful it's tough to keep on top of the ticket queue. Here are some tips from a seasoned traveler on how to travel and stop tickets from piling up.